CleanWay® Environmental Partners provides a number of stormwater filter elements to help you achieve your water quality goals. Depending on site considerations and target pollutants, CleanWay offers various filtration options with a flexible choice of elements to address the needs at your site.

One of the great benefits of a CleanWay system is not having to change any of the hardware if you want to capture different pollutants or to increase pollutant removal after the unit is installed. This could happen as regulations increase, or as site considerations change over time. You can simply exchange the media during regular maintenance or at any time.

With our adaptive product designs, we can provide filter elements that fit any size catch basin whether round, square or rectangular. Please complete the Client Worksheet for Round or Square / Rectangular basins and we’ll provide a quote. 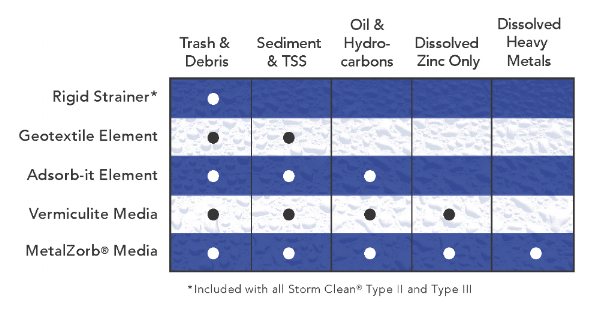 Client Worksheet for Round Catch Basin

Client Worksheet for Round Catch Basin 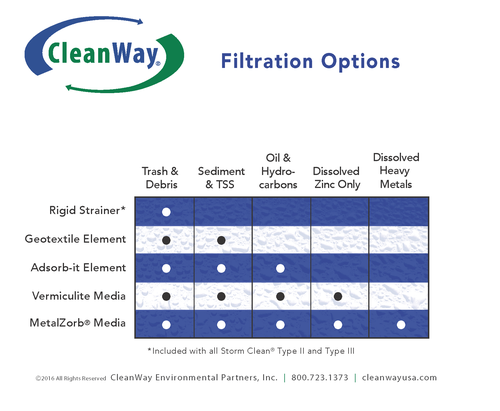 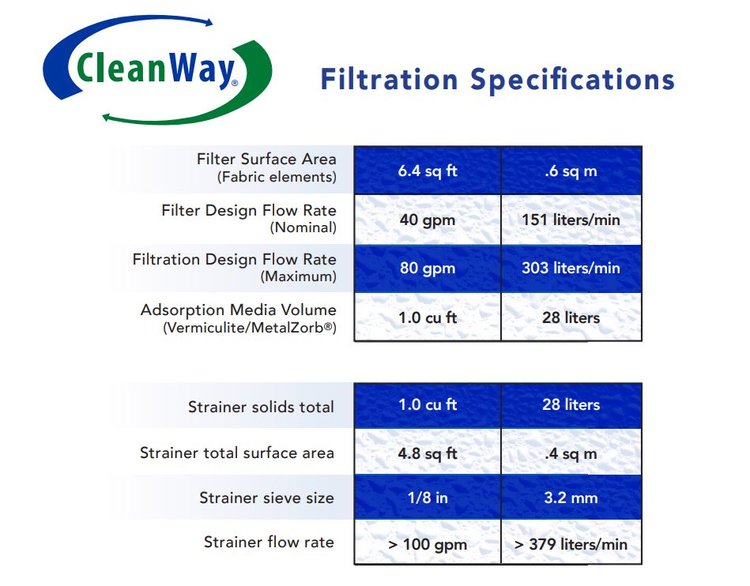 SELECT FROM A VARIETY OF FILTER ELEMENTS

We manufacture all of our Storm Clean® patented filtration products in the USA.

teel, are powder coated and feature a handle for easy access and cleaning. Our strainers are made with 3/16” openings to meet and exceed California’s 5mm requirement.

ADsorb­it® Filtration Fabric is manufactured from 100% recycled select textile fibers and allows a virtually unrestricted flow of water through the fabric at rates in excess of 100 gallons per minute per square foot. Filter elements retain oils, oil sheen and oil­borne contaminants in the fabric matrix and can retain up to 20 times its weight in oils. They are a great solution for removal of oils and hydrocarbons commonly found at industrial and municipal sites.

Vermiculite is used in a number of stormwater management systems and designs. Because it can absorb and adsorb a lot of water and also improve drainage capabilities even when holding water, vermiculite is used to hold back water and give it more time to naturally drain away or be filtered. Vermiculite features interesting cation exchange capabilities and is employed when heavy metals pollute storm water and need to be removed before water is discharged downstream. In the white paper Evaluation of media for the adsorption of stormwater pollutants, vermiculite was analyzed along with 7 other media for their adsorption of stormwater pollutants. Of the media tested, the greatest adsorptive capacities of stormwater pollutants were demonstrated in GAC, anthracite and vermiculite. These materials demonstrated good adsorptive capacity for TN and TP (20-60%), and heavy metals (20-100%). While GAC is the best performer, it’s not practical as a passive stormwater filter medium because its particles tend to compact and resist the flow of water to such a degree as to cause pooling and local flooding.  Vermiculite is chosen because it has the ability to absorb dissolved heavy metals without leaching, resistance to compaction and high rate of flow.

MetalZorb® is our patented sponge media that effectively absorbs and retains heavy metals so they don’t leach out. MetalZorb efficacy depends on various site considerations including the amount of pollutant to be removed, desired removal efficiency, average size of suspended particles, affinity of the sponge for the targeted pollutant, consistency of the slurry, and the nature of bonding forces which cause the pollutant to be attached to the suspended particles, among others.

Biochar’s incredible porosity and surface area give it a high capacity to adsorb a wide variety of contaminants from water. In many ways, biochar can be thought of as a less expensive version of activated carbon that can be used in many of the same applications. Recent laboratory testing conducted in the Pacific Northwest shows that biochar can effectively reduce contaminants including:

Biochar filtration is an emerging technology that has demonstrated short-term efficacy in pollutant removal from contaminated stormwater, especially for dissolved metals. CleanWay blends Biochar with MetalZorb to target copper and zinc; the blend is often more effective at removing targeted heavy metals than either medium can achieve on its own. The long-term efficacy of biochar is still being evaluated as we have witnessed a variety of results over longer periods of time.

How can we help you?

Give us a ring

THERE ARE NO RETURNS ON STOCK ITEMS AFTER 30 DAYS AND ALL SALES FOR FILTERS, METALZORB MEDIA, AND ALL CUSTOM ITEMS ARE FINAL. Dismiss